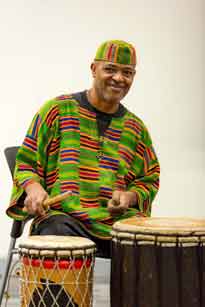 "I learned first hand about challenges some people face trying to balance business, personal life, identity, and most important, change.  My role as a Sr. Executive Support Analyst, then later a Sr. Project Manager for a major corporation, allowed me to interact and hold meetings with many department employees ranging from temps to the executive level.

The life changing lessons I received was when I had to disable computers and network connections for an executive who attempted to commit suicide, then later, a long time fellow co-worker who committed suicide when he was down graded, then released in a lay off.  I believe he felt his identity was so attached to what he did, that when change came, he lost his identity and thus, the will to live.

My life changing moment was when I realized that what I do does not define me, I define what I do in life.   From that point on I began to share my gift of rhythm and harmony, and a genuine interest not only in what a person was doing in their employed roles, but how are they doing as a person.  The experience made me a better project manager and opened a pathway for which I still travel today."  --Baba Kwasi

Baba has been conducting presentations, performances, lectures and storytelling for over 25 years to diverse audiences and institutions.  Always with passion and the intention of motivating and inspiring others sharing his craft and life lessons learned.


Baba began playing drums at the age of six, under the teachings of his uncle Shams D. Abdul Sabur, during the Afro-Cuban arts movement of the 1960's and 70’s in New York.   Communication with the drum was extended to the pursuit of a masters degree in Computer Science and Project Management.  Baba worked as a Sr. Project Manager, Executive Technical Support Manager and Sr. Consultant for various corporations including Xerox and Sprint.